Well that's what happens when you don't check your list of ingredients before you start baking. I thought I had enough confectioner's sugar to make the butter cream frosting but turns out that I did not. However I discovered this juicy tidbit only after I had baked oh about 62 mini chocolate cupcakes :)

Yes, yes I have 62 of these beauties sitting in my kitchen waiting to be eaten. Maybe the gods were trying to say hey we like your waist line so we are helping you keep it like that? Needless to say my son was not too happy about the lack of frosting. 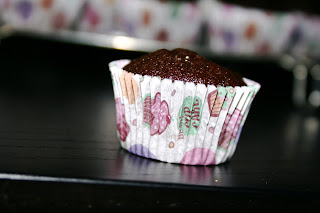 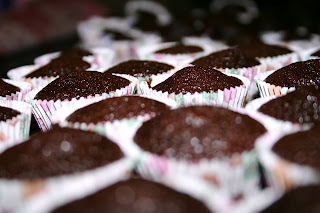 All that aside I did try the One Bowl Chocolate Cupcakes from Martha Stewar's Book "Cupcakes" verdict - it was ok, could have been a little more moist but I will be trying this again and maybe tweaking the receipe because the recipe is a dream to make in the fact that its fast and simple, even my hubby was surprised at the how quickly these were in the oven.

The two men in the household have already eyed future cupcakes to I'll be back to my baking adventures next week , in the meantime anyone want a cupcake ?
Posted by Wheels and Lollipops at 2:04 PM