The August 2010 Daring Cooks‟ Challenge was hosted by LizG of Bits n‟ Bites and Anula of Anula‟s Kitchen. They chose to challenge Daring Cooks to make pierogi from scratch and an optional challenge to provide one filling that best represents their locale. My first thoughts when I read what this month's Daring Cooks challenge was that, this would be a perfect dish for winter but for summer ? Determined  to turn this into a summer compatible meal I decided to lighten up the filling and pair this with a salad for dinner. The hosts for this month added an optional challenge to this dish - adapt the filling to complement our location. For me this would have been France and the thought of a cheese laden dish did not scream summer to me.

But that's where my joker comes in :) I live in France but I'm originally from Trinidad & Tobago and of East Indian descent. This was going to be the domain that I would work on for the filling. Aloo Pies are traditional Trinidadian Indian street food fare, it's essentially a fried bread like dough stuffed with potatoes. The potatoes are mashed with onions, roasted cumin and scotch bonnet peppers this what gives the "pie" its taste. The pie is most often served with Tamarind (tambran in Trini speak) sauce on the side (as seen in the photo above).

For those not familiar with the fruit Tamarind its indigenous to Africa but via human transportation it made its way to South America and the Caribbean. The pulp which by itself is quite tangy is what is most often used to make condiments. In Trinidad the two most popular uses are either as a sauce or as a sweet called a Tambran ball. 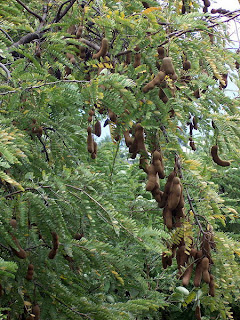 Photo courtesy Wikipedia
The Verdict: This was the first time that I had ever attempted a dish like this and have to say I was quite pleased with my efforts. I think that I prefer it served as an appetizer or with a salad as a main dish. However the different fillings for this is endless and I already have a few playing around for a potential dinner party.

Makes 4 generous servings, around 30 dumplings Traditional Polish recipe, although each family will have their own version, this is Anula's family recipe

Dough Ingredients:
Place 2 cups flour in a large bowl or on a work surface and make a well in the center. Break the egg into it, add the salt and a little lukewarm at a time (in my situation 1/2 cup was enough). Bring the dough together, kneading well and adding more flour or water as necessary. Cover the dough with a bowl or towel. You‟re aiming for soft dough. Let it rest 20 minutes.

Reserve ensure that filling is at room temperature before filling pierogis

On a floured work surface, roll the dough out thinly (1/8” or about 3 millimeters) cut with a 2-inch (5 cm) round or glass. Spoon a portion (teaspoon will be the best) of the filling into the middle of each circle. Fold dough in half and pinch edges together. Gather scraps, re-roll and fill. Repeat with remaining dough.

Cooking Pierogis
Bring a large, low saucepan of salted water to boil. Drop in the pierogi, not too many, only single layer in the pan! Return to the boil and reduce heat. When the pierogi rise to the surface, continue to simmer a few minutes more ( usually about 5 minutes). Remove one dumpling with a slotted spoon and taste if ready. When satisfied, remove remaining pierogi from the water.

For this dish, I lightly browned the piergois in butter, not only for presentation but it did "crisp" the dough a little which gave it a nice texture.

The Tamarind sauce pictured is a commercially prepared sauce that I bought in Trinidad.


Bon Appétit
Posted by Wheels and Lollipops at 9:26 PM 0 comments This dish takes what is sometimes referred to as the "Man Salad' and turns it into a refreshing summer salad. At the market one Saturday morning  the three things that caught my eyes, were a beef steak tomato, avocados and lovely white peaches hmmm I was determined to make this into a dish.

On the menu that night I had marked down Steak salad. In this house it means that its made with using entrecôte or Prime Rib. Once its grilled its thinly sliced and served  in a salad with varying toppings - tomatoes, haricots verts (string beans) avocados basically whatever got our attention that morning at the market. Steak usually shows up on a Saturday as I don't like to keep beef in the refrigerator longer than one or two days as freezing steak takes away some of the flavor- but I digress.

I also love guacamole and salsa :) Do you see what's starting happen to here ? Yep, I decided to combine the white peaches, avocados and white onions with cilantro, lime juice and hot scotch bonnet pepper (I am after all an Island girl). The beef steak tomatoes just needed to be thickly sliced and sprinkled with fleur de sel and fresh pepper - perfection ! The steak was splashed with Worcestershire sauce, salt & fresh pepper and then grilled to medium rare. The salad was as always washed with care and then spin dried by the hubby, he made his vinaigrette and carefully tossed the salad until every leaf was coated. A general reminder that steak needs to rest for approx 10mins after cooking so that juices can be redistributed and remain tender. Presentation ? The gently tossed salad was topped with slices of steak followed by the tomatoes and then the salsa.

The hubby's verdict ? Delicious, needs to be made again, refreshing in short he liked it :) We served the salad with a  chilled rosé from Corsica.

Bon Appétit
Posted by Wheels and Lollipops at 3:41 PM 0 comments 
Bon Appétit
Posted by Wheels and Lollipops at 2:45 PM 0 comments